Q: What is the rate redesign?

A: In January 2017, the co-op launched a five-phase, eight-year program to bring balance and fairness to its rate design. Over that span, members’ rates will gradually transition to recover nearly all of the utility’s fixed costs—operations, inventory, maintenance, repair and administration overhead through the monthly facilities charge. The kilowatt-hour rate, or energy charge, will be based on the co-op’s energy costs.

Q: How are these costs currently recovered?

A: Currently, the facilities charge and the kilowatt-hour charge recover the costs of the co-op’s business operations and the delivery of electricity.

Q: Why the need to change?

A: It became necessary to separate or decouple fixed costs from electricity use because fixed costs began to exceed revenues. Various factors contributed to this imbalance. The chief driver of electricity demand is the weather. It has become more unpredictable and extreme, creating strong revenue fluctuations and making business management more challenging. The electric industry has rapidly evolved, with emerging technologies affording customers multiple ways to reduce their energy use through efficiency and rooftop solar. CEC applauds and encourages members’ efforts to reduce their energy use. Nevertheless, the unintended consequences resulted in fewer members contributing toward helping the co-op recover its fixed costs, leaving other members to pick up the balance.

Q: How will this affect the size of my monthly bill?

A: On average, whether a low, average, or high-energy user, members’ bills will fluctuate little. (Please see the Monthly Residential Rate Redesign Comparison Chart below). For residential accounts, members using the CEC average of approximately 1,409 kilowatt-hours (kWh) per month will see little or no change, less than a dollar either way. Members using significantly less electricity, 900 kWh per month or less, will see a monthly increase of no more than three to four dollars. Members using considerably more electricity than average, 3,000 kWh a month, will see a decrease in the range of four to five dollars. 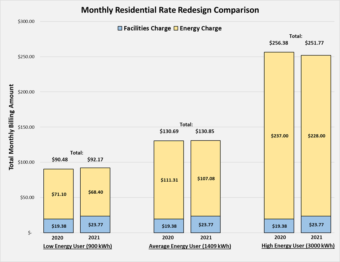 Q: What is the schedule for the changes?

Q: What was the process for reaching the approach taken to redesigning rates?

A: In 2015, EES Consulting, an independent party, conducted a Cost of Service Analysis, or COSA, for CEC. This study analyzed all costs of building, operating, and maintaining the electric system and serving members. The analysis showed that the then facilities charge fell well below the needed level to ensure consistent recovery of the fixed costs. It also demonstrated the need to bring more equity to how different rate schedules – residential, commercial, industrial, and irrigation – were structured to recover costs. To address the imbalance and ensure every member pays its fair share for fixed costs, a rate design advisory committee, made up of ten volunteer co-op members representing all customer classes, convened in August 2016. The committee recommended a phased-in approach to decouple fixed costs from energy use, which the board of directors adopted. This year, 2021, marks the co-op as two-thirds of the way towards rebalancing the rate structure.