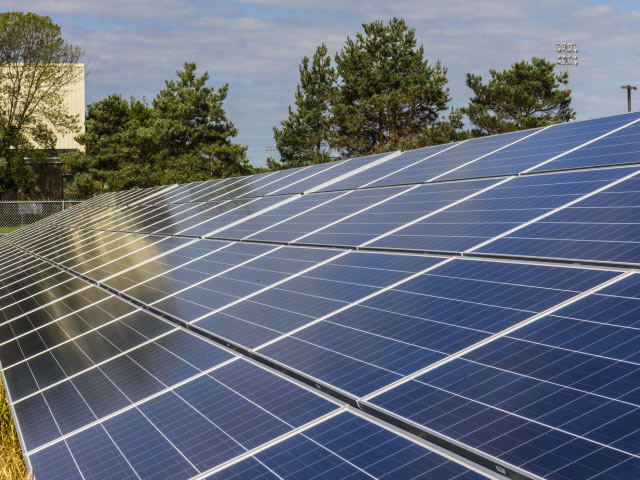 Central Electric’s 200,000-watt community solar project in southeast Bend was developed in a manner that offered co-op members two ways to support solar energy development. Our Green Power program enables members to make voluntary contributions through their monthly bill payments. The Shared Solar program, which ceased accepting new enrollments after December 31, 2018, enabled members to subscribe to the energy production from a partial, whole, or multiple panels and see that energy credited on their monthly bill.

The first 200,000-watt phase of the community solar project came online in January 2016. In 2018, the project reached fully-funded status and today’s contributions by CEC members through the Green Power program are being dedicated to the construction of future phases. The project is designed and permitted to be expanded in 100,000-watt increments. The next phase will be added as funding reaches levels needed to pay for construction. The project will be fully built-out at 500,000-watts.

The Shared Solar program was suspended at the end of 2018 because the costs of CEC’s community solar project had been fully recovered. The project was fully funded by members who voluntarily participated in the Community Solar program, with none of the costs being borne by non-participating members. Plans to begin development of the next 100,000-watt phase will commence once the amount of accumulated Green Power funds combined with projected revenues from a second Shared Solar offering indicate the second phase can be fully funded. Once Central Electric starts the development process it will launch efforts to promote participation to its members. Co-op members will again be offered the opportunity to subscribe to defined levels of production from the project to receive a credit on their electricity bill equal to the amount of electricity generated by their subscription.

You can check the project’s energy production both looking back over recent months and in real time by going HERE.

To enroll in our long-standing Green Power program visit our Green Power page to learn more and access the online signup form.